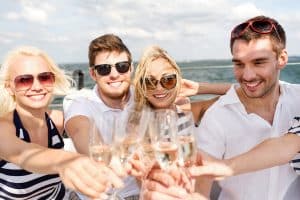 Let Us Bail You Out For Boating Under The Influence

If you have a boat and regularly party out on the water, you’ll have to be more careful this year. The penalty for Boating Under The Influence, or BUI, has increased from just being a misdemeanor to a full felony charge. If you get caught, you’ll have a hefty penalty to pay, and probably jail time. Here’s a look at what is going on with the new laws.

In June of 2016, North Carolina passed Sheyenne’s Law, in remembrance of a teen who was hit and killed by a boat. This new law increased the penalty for boating under the influence to a felony charge. It is called BUI or Boating Under The Influence, and can now cost you some serious jail time. In South Carolina and other states, there is still both a misdemeanor charge and a felony charge, depending on the seriousness of the accident. In North Carolina, you are now automatically charged with a felony.

In order for a charge to be placed, you must have a blood alcohol level of 0.08 or higher. This is the same as if you were charged with a felony for DUI charges. Whether on land or at sea. Intoxication behind the wheel is a serious offense. You can cause property damage and even bodily injury and death when involved in a boating accident. It is not to be taken lightly.

If any bodily injury occurs during the accident, a judge has the jurisdiction to give up to 15 years of jail time for a felony BUI. If a death occurs, the judge can rule up to 25 years of jail time. That is a lot of hard time just for having a party out on a boat. There are also other penalties that you could incur. A judge could add on:

If you or someone you know has been charged with a BUI in Wilmington NC, call Amistad Bail Bonds today. We can help to get you the bail bonds in Wilmington NC that you need, 24 hours a day. We can send you the forms electronically, meaning that you might not even have to leave the comfort of your home to receive bail. Give us a call at any hour to get started right away.